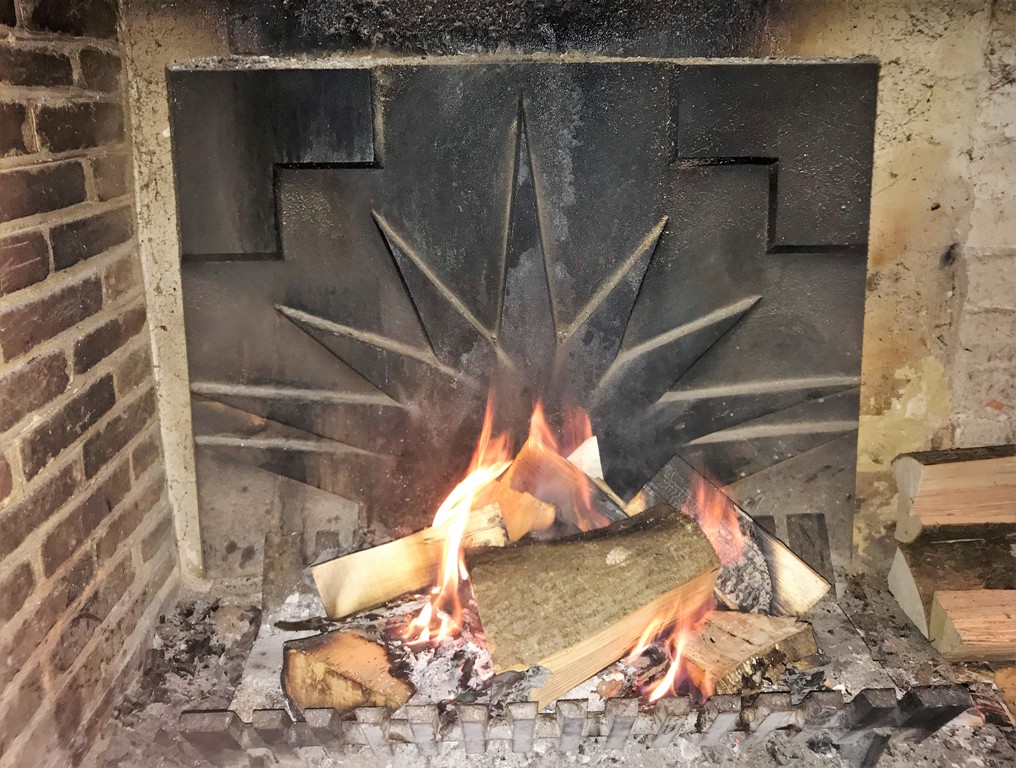 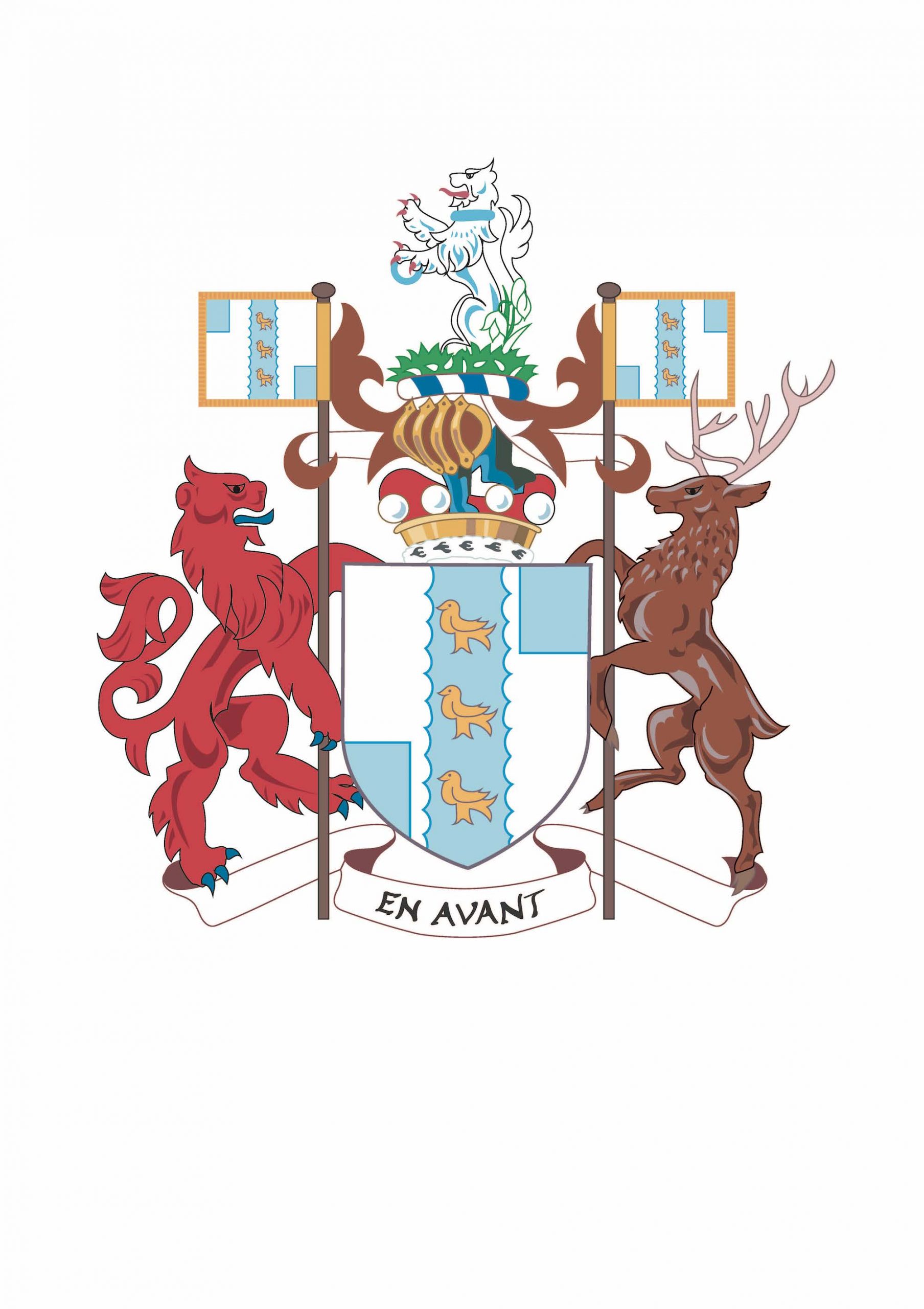 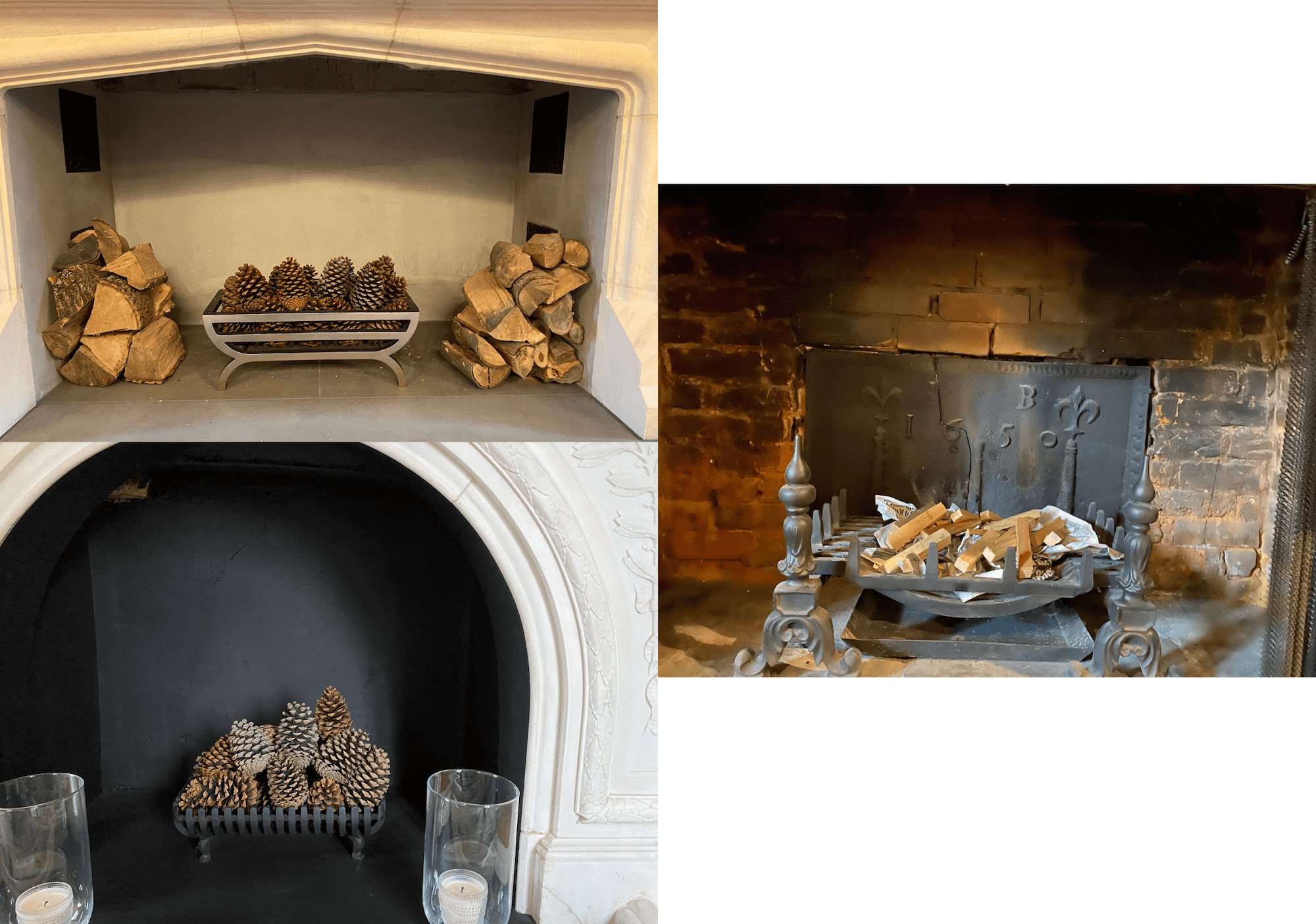 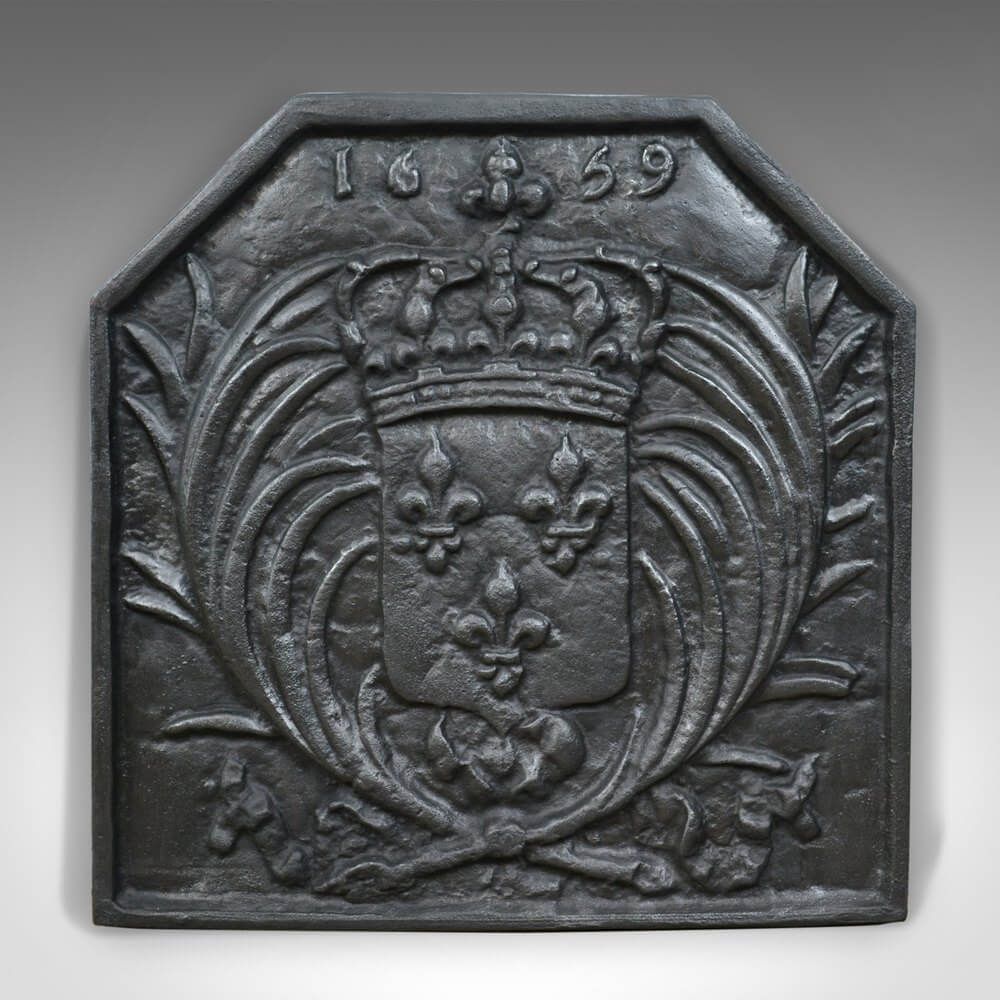 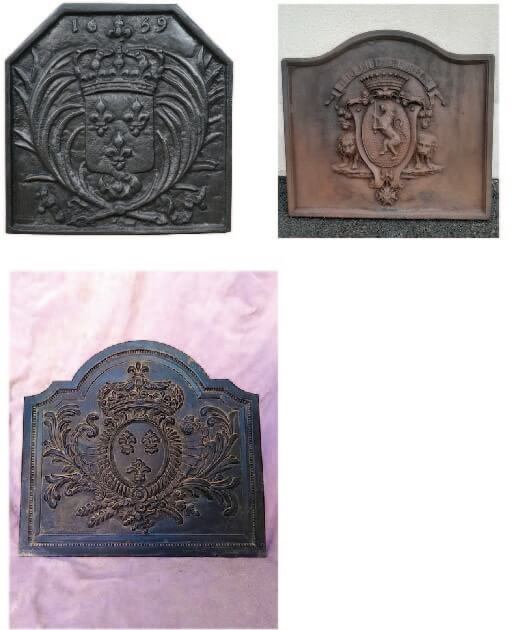 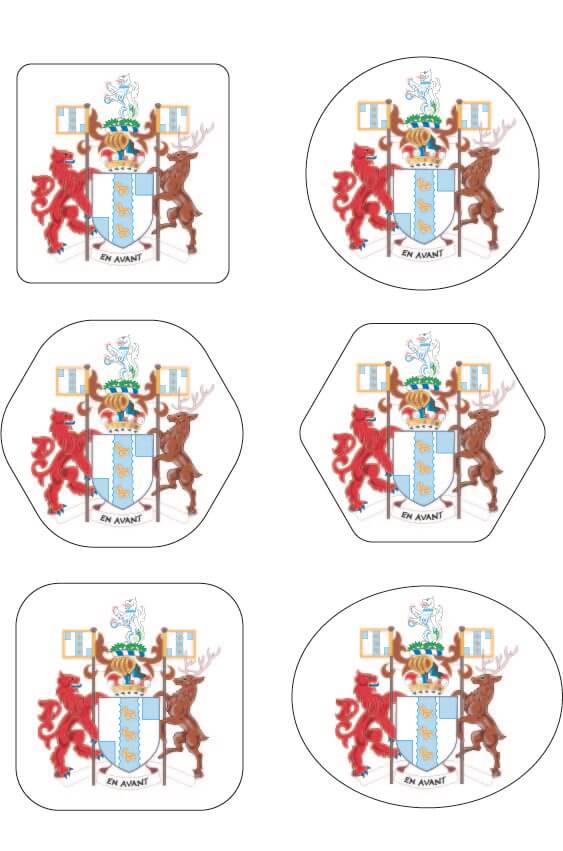 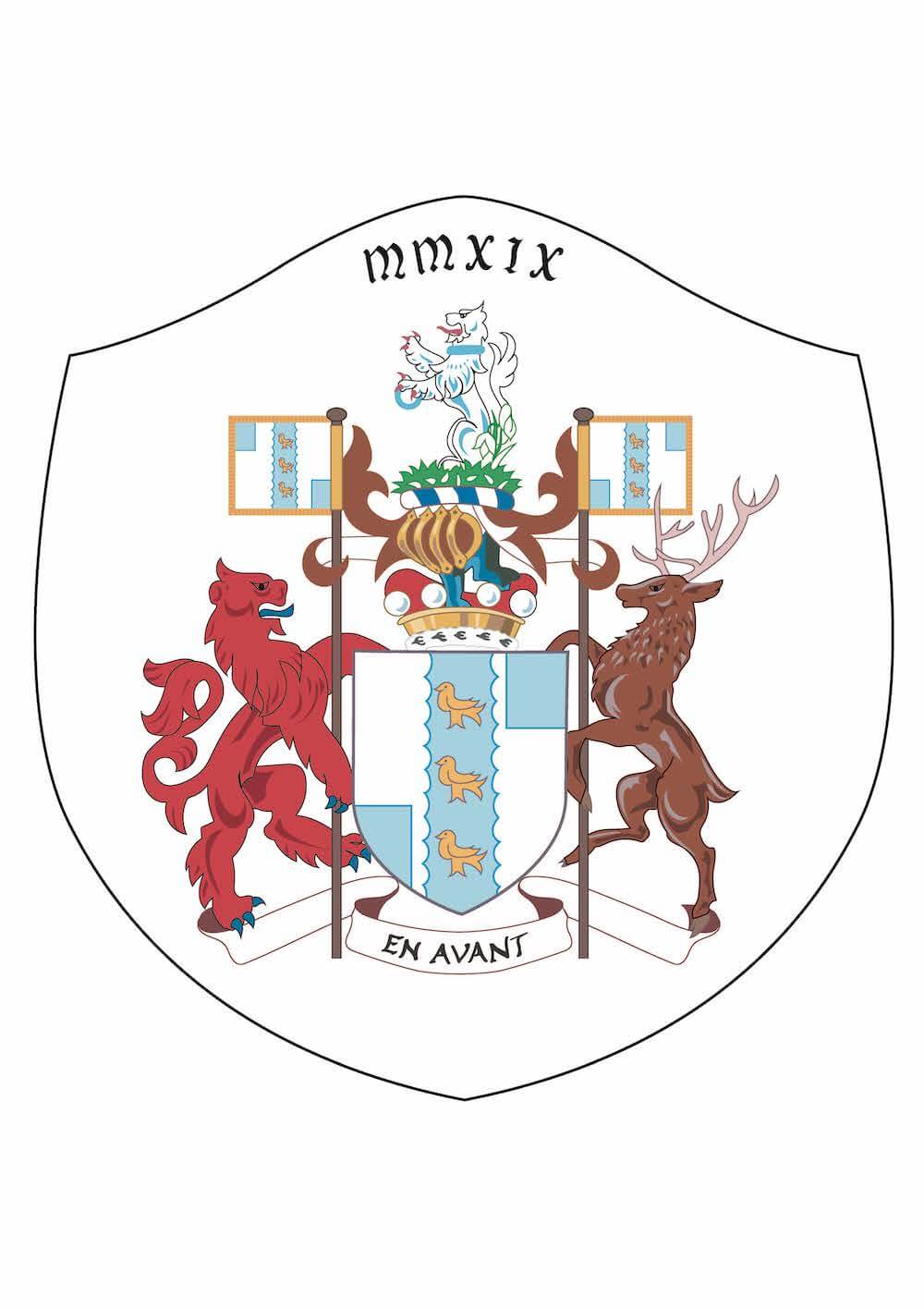 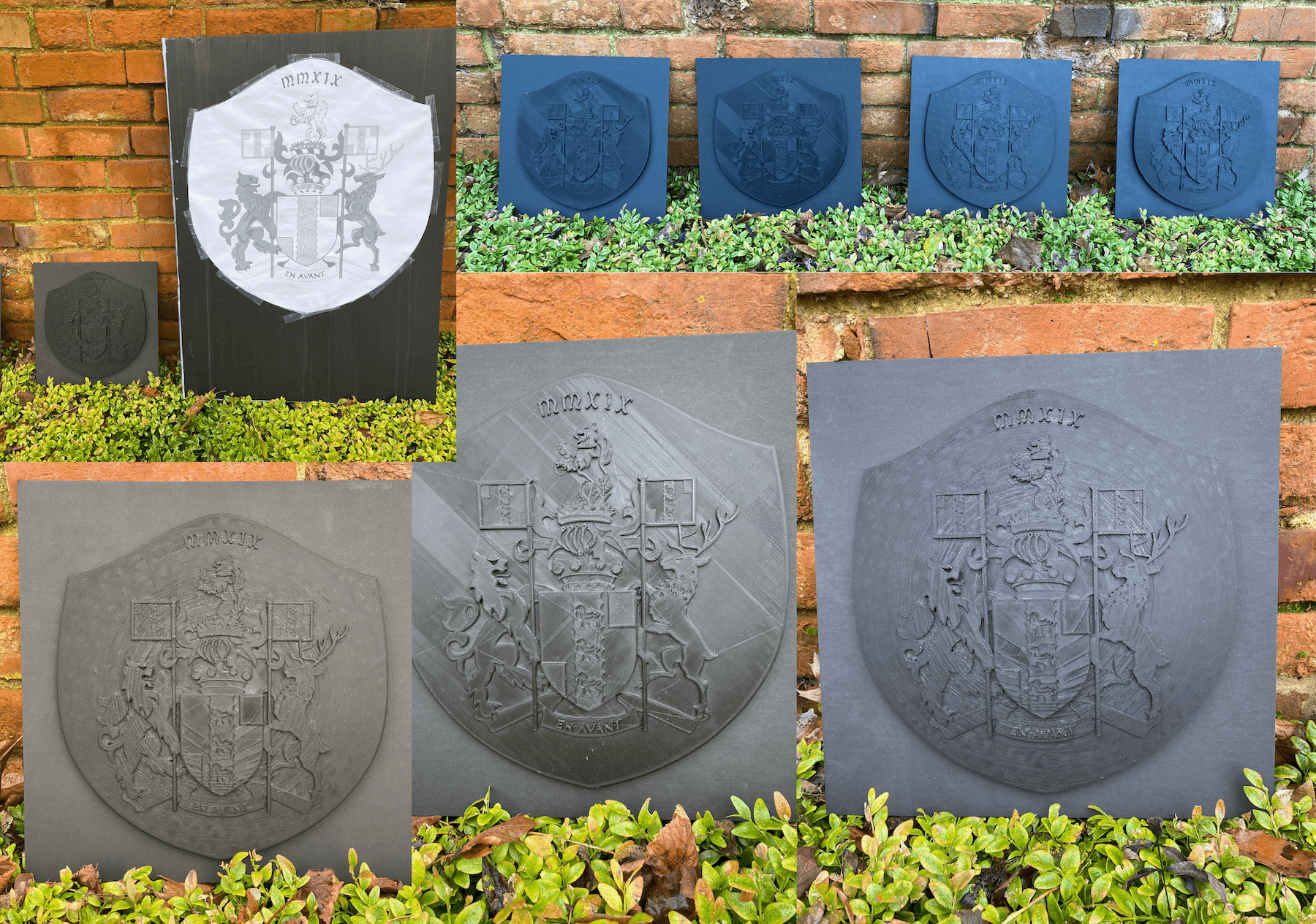 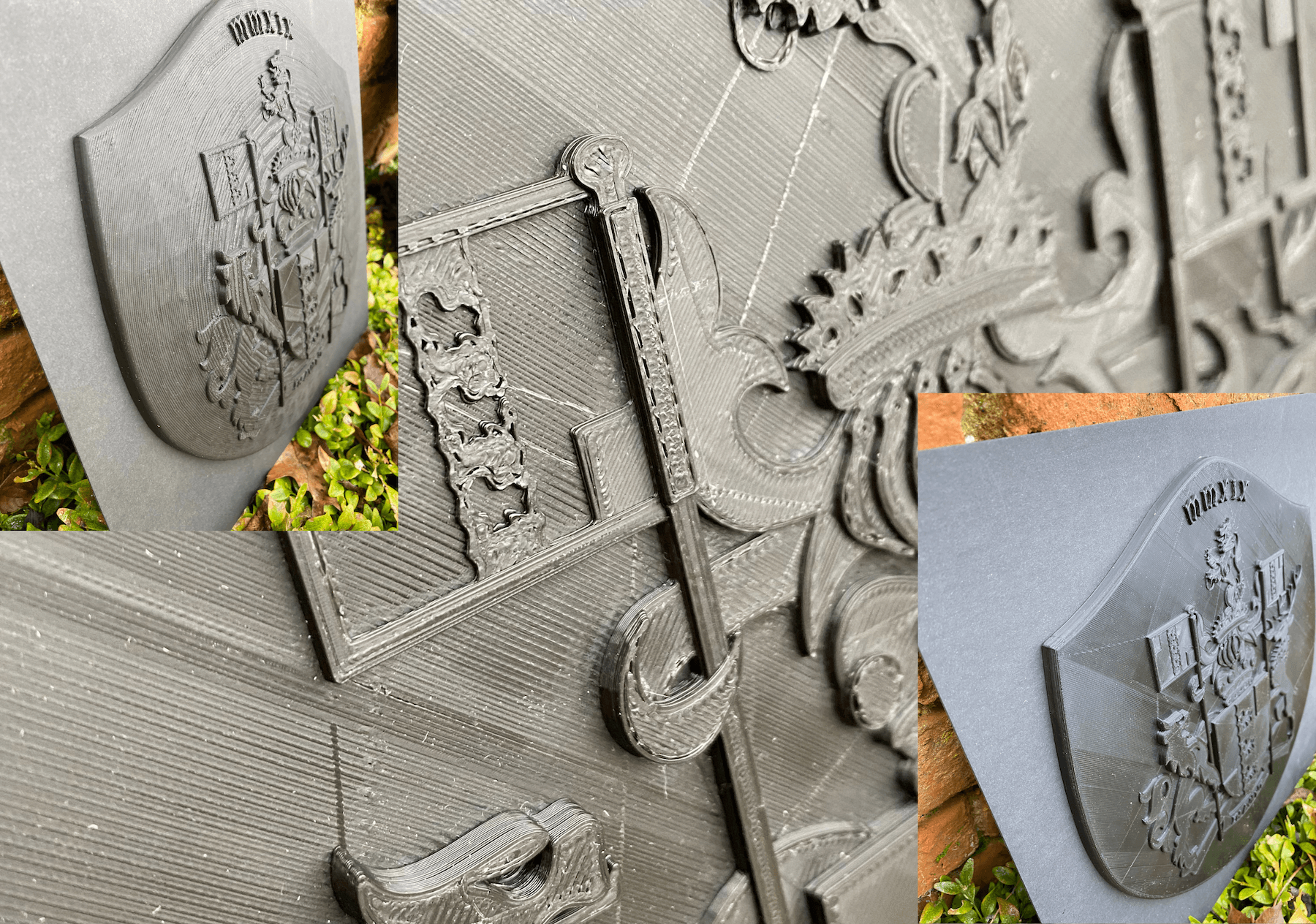 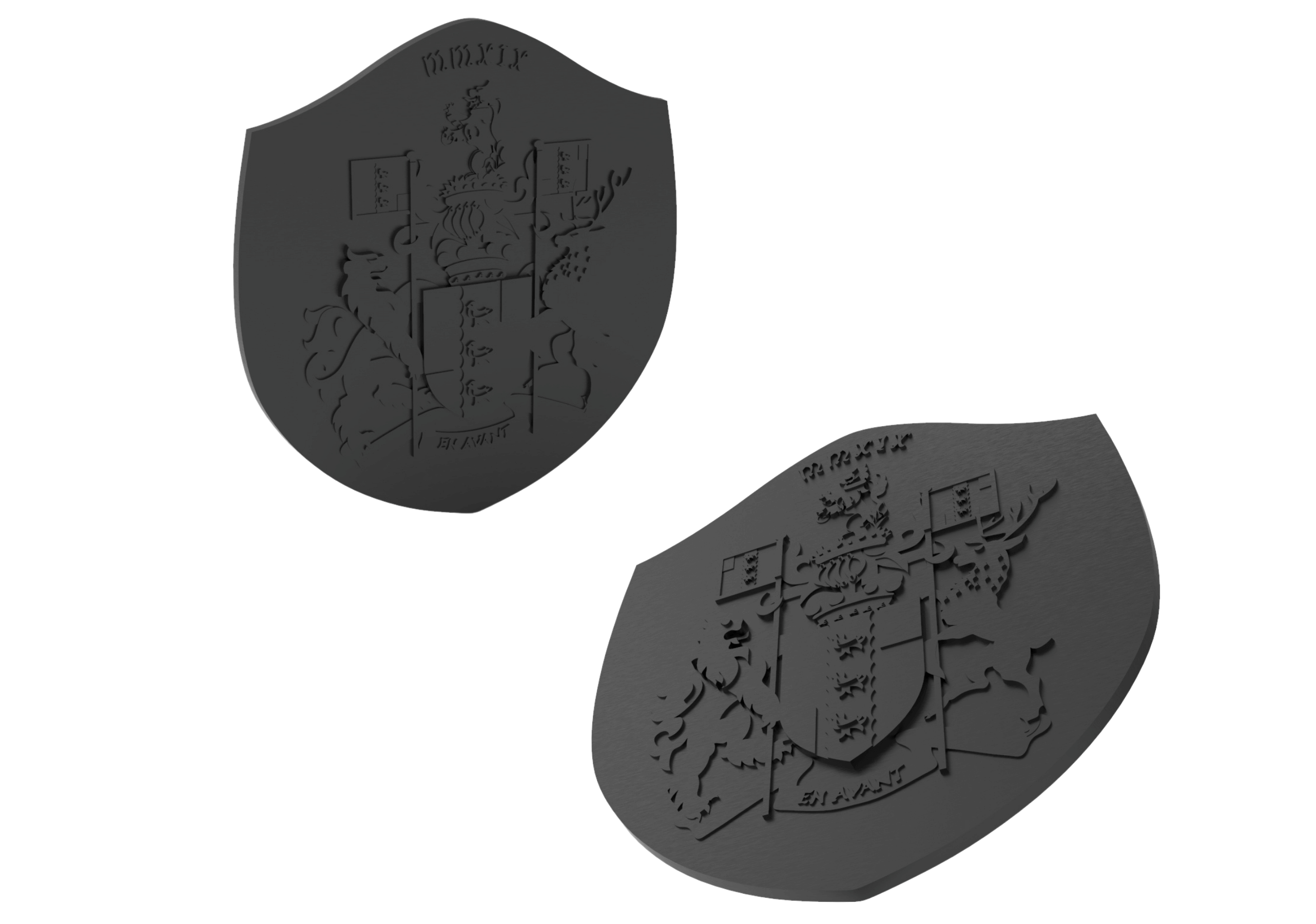 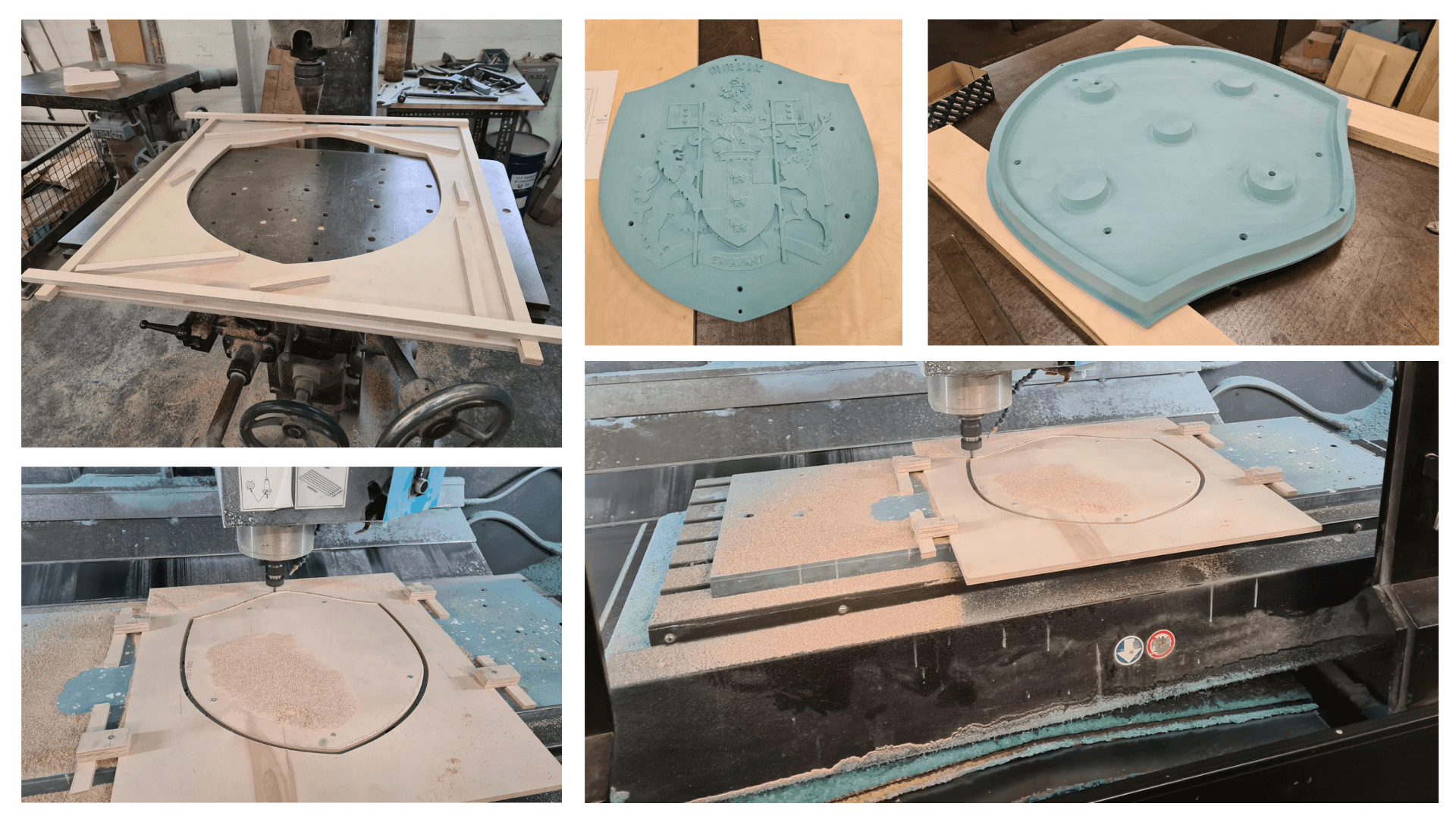 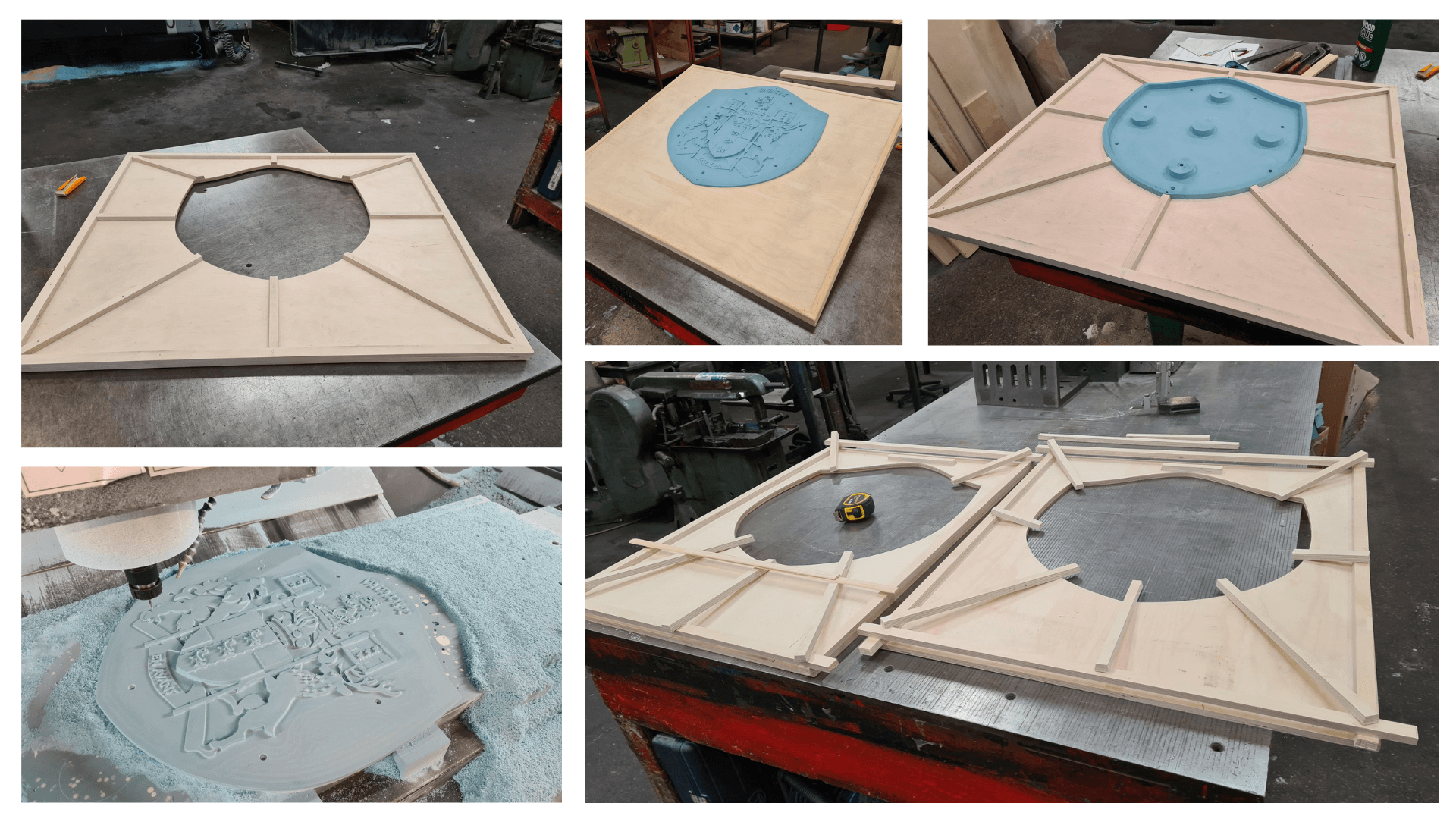 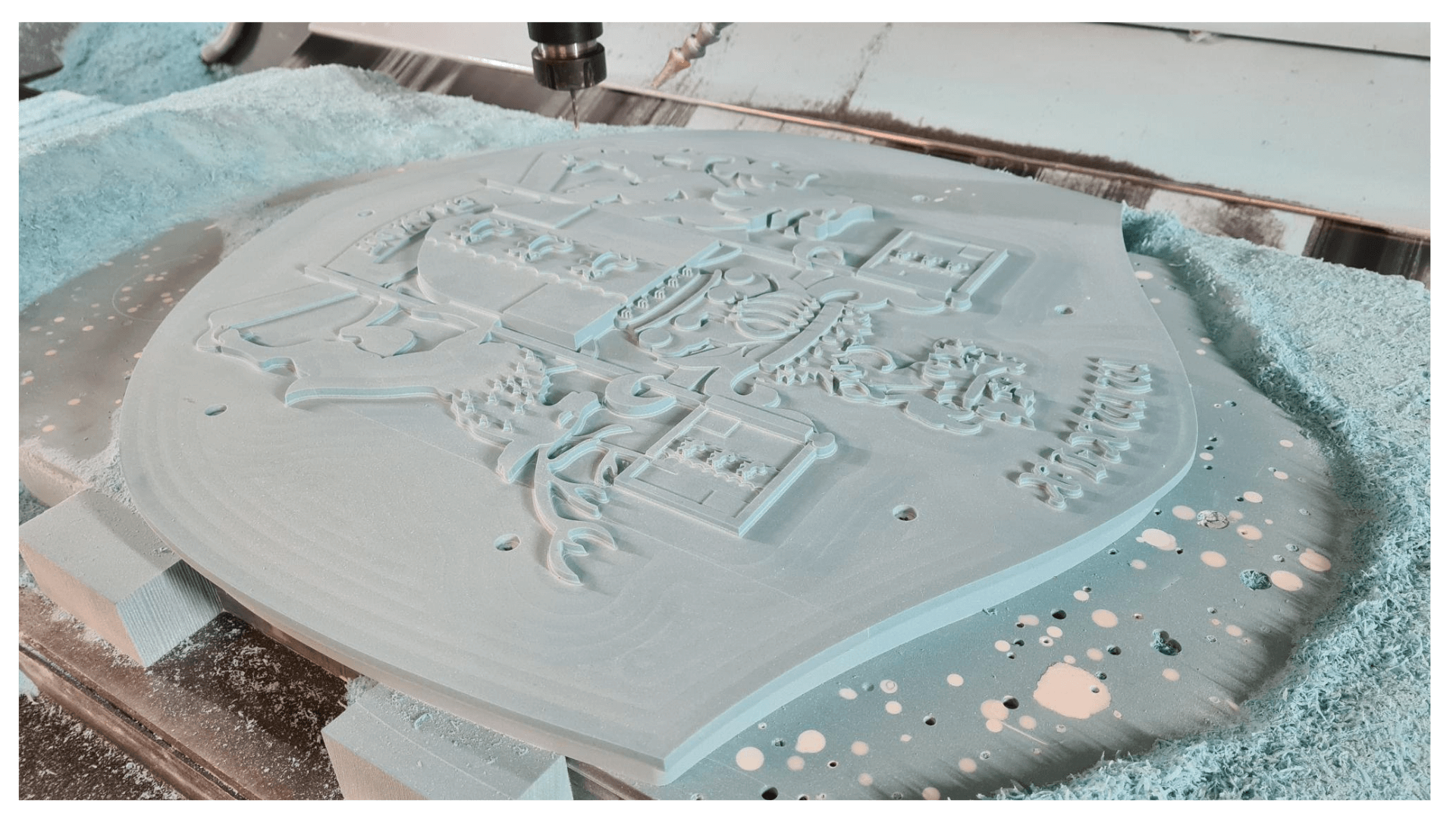 The traditional offer of cast iron antiquated coats of arms was felt to have become “old hat” and not the thing for a minimal pub interior still wanting an authentic wood burning fireplace, those with grate and logs rather than the trendy gas ones seen in some fashionable dining pub interiors. In this regard Mark was commissioned to draft a design for a nearby pub, The Rising Sun. A pattern was made of the design. In this instant the pattern is machined in ply, the edges of which are bevelled with an incline. The incline leaning in and away from the face of the pattern so that it can be lifted out from the sand that is packed about it to form the mould leaving a clean imprint. Once removed from the sand the hollow left takes the molten iron when poured from the cauldron for it to set in. The sand is bashed away from the now solid iron shape to reveal the casting. Two fire backs were made. Multiples of the design in cast iron are possible and have become the first in a developing range of contemporary cast iron fire backs.

Today the traditions of the ancient craft are being applied to contemporary and traditional forms of metalsmithing to produce modern artworks that combine the two determined by the collaboration of Mark and the client.

One such client, Lord Brownlow commissioned Mark to design a cast iron fire back that could be duplicated to dress the backs of the six fireplaces in his 18th Century home. As it happened Mark and his wife Hilary were having a wedding anniversary lunch in the local dining pub the Black Horse in Amberley West Sussex when first approached by Lord Brownlow’s PA.

Nicola, Lord Brownlow’s personal assistant made the call. Nowadays Mark doesn’t get many phone calls, so surprised, answered the ringing mobile. “Good afternoon my name is Nicola, I am the personal assistant to Lord Brownlow, we are interested in having four, possibly five, bespoke cast iron fire backs made for the fireplaces of Lord Brownlow’s residence. They are to feature Lord Brownlow’s coat of arms surmounted by the date of his ascendancy to the House of Lords, 2019”. A succinct explanation issued by someone in such a position as PA to the likes of Lord Brownlow. She went on to explain that it was in the 2019 honours list issued by Terisa May on her departure from Downing Street of the same year. Nicola continued to explain that she can send the artwork of Lord Brownlow’s coat of arms motif for me to review and that it is most important that the date 2019 be incorporated into the motif in some way or another.

This call occurred on October 28th, 2020 during a period that the Covid restrictions were relaxed enough to dine in a restaurant whilst following a protective protocol.

“Well, that’s very nice of you to call but extraordinarily enough I am out having lunch with my wife in a restaurant at the moment!” Mark exclaimed with a jovial tone in his voice. Mark could hear Nicola smiling at the irony of the moment. “Would you be so kind and email me the image of Lord Brownlow’s coat of arms and I will get back to you in a few days with an estimate of the likely logistics and costs for such a project.” “Of course, that will be fine I’ll do that” exclaimed Nicola, “I’m so sorry to have interrupted your lunch.” “No not at all I’m delighted you called and most excited to be considered for such a project.”

The image arrived, a complicated motif of shield, surmounted by feather, crown and lion, flanked by flags on poles supported by a railing Lion and Stag with the moto En Avant (Step Forward) set into the ribbon under. Small bird motifs stacked in rows of three centred to the shield and flags.

It was clear that to replicate this as a pattern suitable for casting was going to be a demanding task. Right up to the 20th Century such casting patterns were hand carved from slabs of mahogany used for its durability and fine grain in which the details could be carved accurately and not splinter or diminish during the making of them and the subsequent repeated sand casting from them.
Not only do cast iron fire backs enhance the presentation of a fireplace they serve a practical function of protecting the stone or brickwork to the rear of the fireplace. They also, by virtue of the physicality of the solid iron serve to absorb the heat from the burning logs and re-radiate that heat into the room retaining the heat long after the fire has settled into to a modest pile of smouldering cinders. Clearly the first ever radiators!
Today’s technology facilitates the same result of a cast-iron fire back, or indeed any other detailed casting in aluminium, engine steel, copper, brass or even silver and gold by way of 3D modelling into computer programs that guide CNC cutting machines that in turn carve the pattern to then be ‘loose sand cast’ in this instant, in the traditional way.
Discussions were had concerning Lord Brownlow’s project with both the foundry sales director and the production director for the pattern making works both located adjacent to each other in the heart of what was once the land of a thriving British steel and iron fabrication industry during the 17th 18th 19th and 20th centuries.
The motif was considered by both and approximate values agreed for the pattern making and the casting based on an approximate dimensioned photo of one of the fireplaces sent to Mark by Lord Brownlow’s butler.

Image 2: Sum of Lord Brownlow’s fireplaces
An agreement was made to progress the project with values proposed for the design and development work required and the likely cost of the pattern making and casting. This with the understanding that these values may fluctuate during the project to be confirmed and agreed before moving on from one stage to the other.

Image 3 & 4: 17th 18th and 19th century cast iron fire backs to inform the 3D computer modelling technician
Marks first job was to visit the house and survey each fireplace, making a template of each fire back and determining the size and exact location of the motif to appear on each, set precisely within the fire back plate so the motif is visible above each fire great. The fire grates are all different dimensions of width and height as too are the fireplaces.

It became evident the best way to manage this was to agree to have Lord Brownlow’s coat of arms motif set into a frame or as it turned out a shield giving the motif a boarder that was of a consistent size to then be mounted on each of the different size fire back patterns which in turn would go to form six solid castings to be placed in each of the different size fireplaces.

Image 5: Ideas of shape to frame the coat of arms
A crucial part of the design work involved many options for the shield shape and the size of the motif to be used with in the overall size of the shield. This was dependent on the location of the date, whether 20 would be set on one side of the top lion and the 19 on the other. Whether to place the date over the top lion. Whether to use Roman numerals or Greek. What size type to use. The options were all drafted and sent to Lord Brownlow for his consideration.

Image 7: The maquettes of the 4 options and a full-size template of which 6 were made to determine the optimum size for each fireplace.

Image 8: Close up of the 3D printed models

A graphic schedule for each fire back determined which size fire back was intended for each of the six rooms. As it turned out the Ballroom and the Dining Room are the same size as are the Sitting Room and Reception Room. The Hall and Small Sitting Room are of a different size to each other. It had already become apparent that the shield shape with the motif within it would be a fixed dimension and that its positioning on each of the different size back plates would be identical only in that the shield would be centred to the fire back plate and 5cm from their top. The other location dimensions varied in regard to the overall size of the required fire back.

Image 9: The graphic schedule of the required fire backs with exact dimensions locating the shield with in each.
Mark devised a strategy for the pattern making and casting that would reduce the production costs given 4 different sizes of fire back were to be cast. Usually, one pattern would be made for one casting. This pattern would be used many times to duplicate a casting. It was agreed that the 3D computer model would be used to inform the CNC machine to only cut out the pattern as the shield only with the motif upon it.

Image 10: Two views of the final 3D model to be loaded into the CNC pattern cutting machine
The strategy Mark had devised for the casting of the 4 different size cast iron fire backs for Lord Brownlow determined that one pattern was made in the CNC machine cutting the shield and motif from the pattern board material (this being an expensive product developed especially for the prepose) and that the four different size back plates required would be engineered in a play board with structural beading also was applied and a void cut in to receive the shield pattern like a plug sitting in a plug hole. The beading supported the shield within the depth of the board allowing the shield to be removed and re-set into the next size to be cast. The beading also was applied to the front perimeter of the assembly served to frame the rectangle in which the shield is set. The beading applied to the front and rear of the plate serve to reinforce the casting and reduce the volume of iron to be poured. Consequentially the weight of the finished item, which was originally estimated to be in the region of 80-100 kg, would be reduced. A measure enhancing the production process and to ease the effort required to handle the finished items into the backs of each fire place.

Image 11: The cutting of the shield shape and pattern mounting boards

Image 12: The cutting of the motif and shield and the fabrication of the different size back plates with applied beading.

Image 13: The shield pattern machined by the CNC cutter with the final option for Lord Brownlow’s coat of arms.
Once these components arrive at the foundry the process of making one mould at a time casting two fire backs. Then lifting out the shield shape form the ply board and beaded back plate and placing it into the next size to be cast can begin.

Image 14: The making of the moulds by packing sand about the pattern using the” age old” loos sand technique for casting of the fire backs
Image 15: The pouring in of the molten iron into the mould
Image 16: The cast iron fire backs emerge from the sand.
In addition to the bespoke commissions Mark is working to develop a product range of wrought iron and cast-iron artefacts which will combine the essence of the craft with ingenuity, style and the practical requirements of the home and garden.