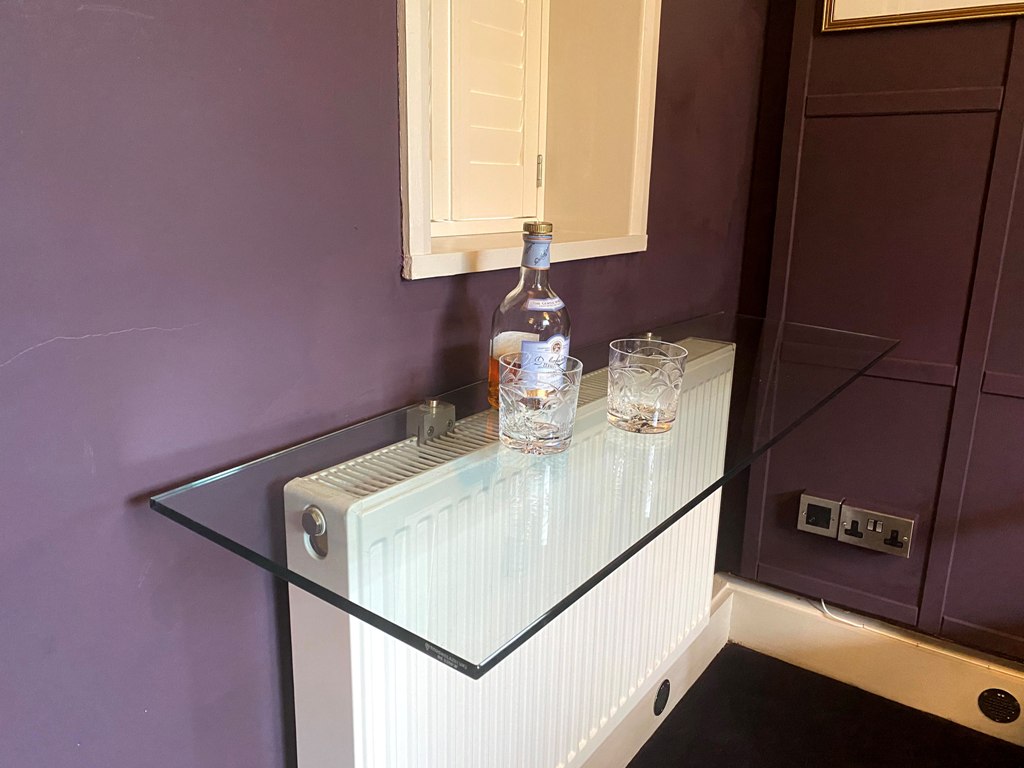 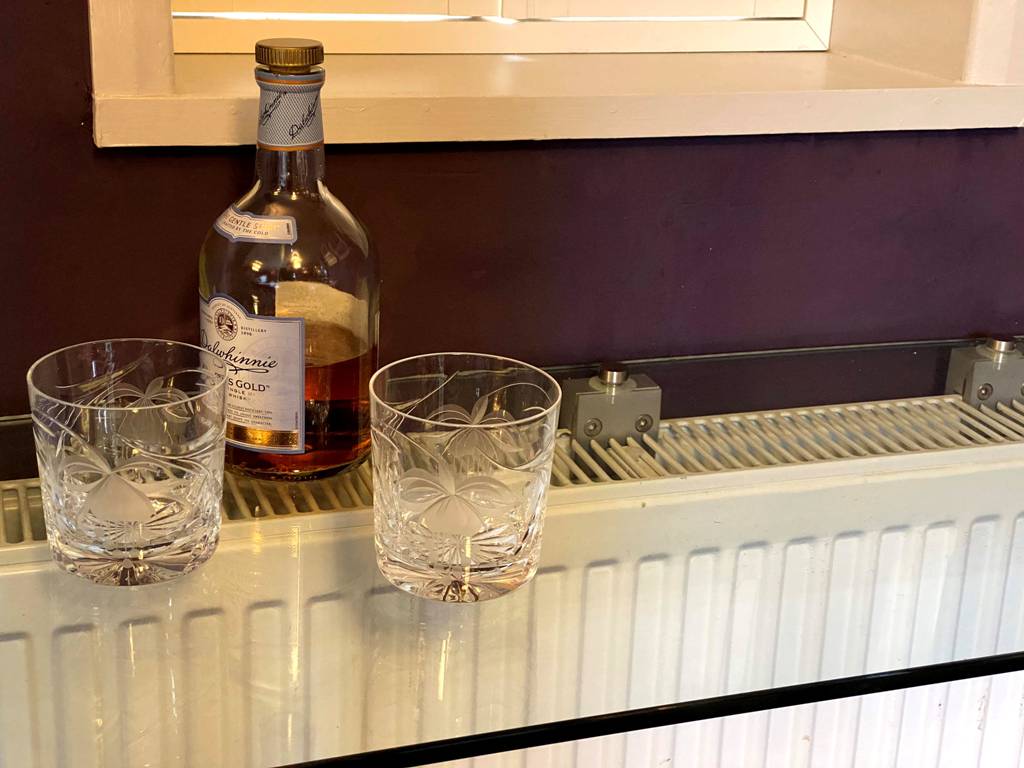 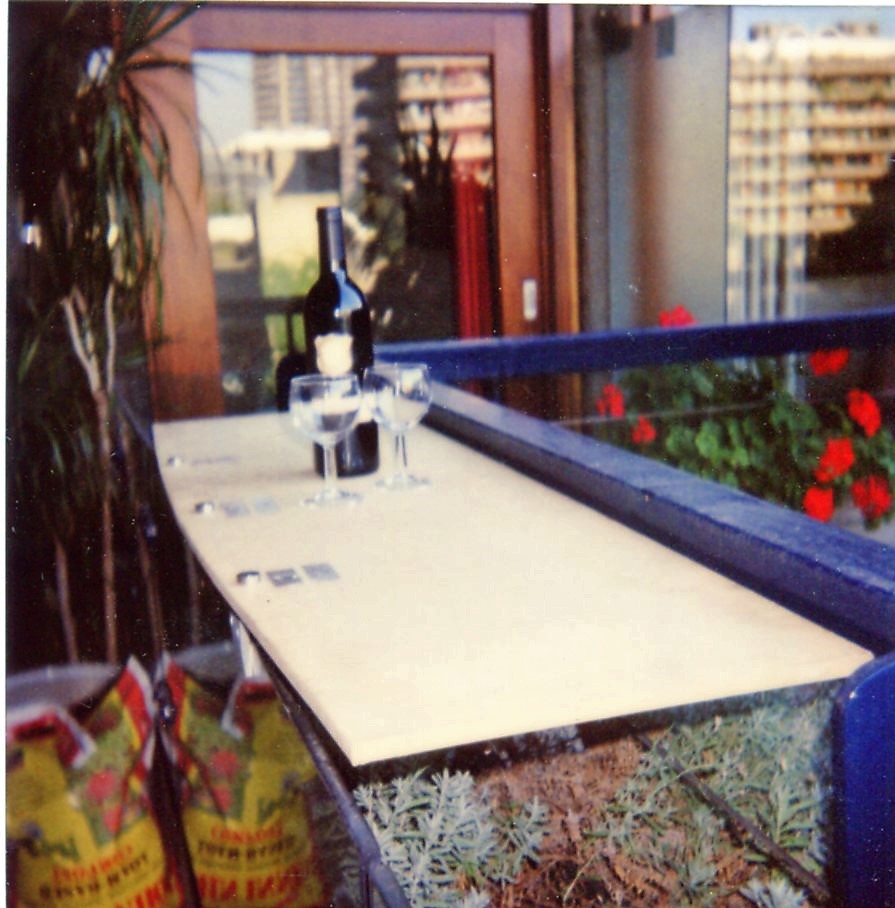 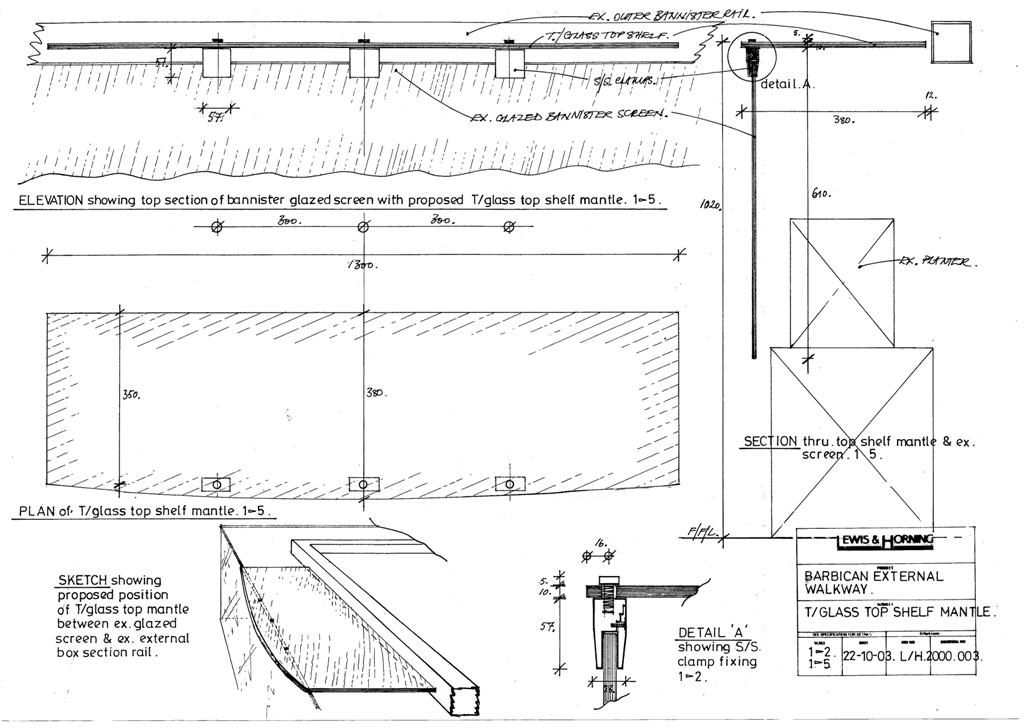 Born from Mark’s clients desire to stand with his guests drinking and smoking on the balcony of his apartment, to enjoy the spectacular  evening and night time vistas across London, this table is perched on the existing glass panels by way of fixing brackets allowing it to be easily removed.

The balcony screens run parallel to the walkways forming an open format of glass and steel rails allowing the areas in between to be planted with flowers and shrubs.

The image above shows the prototype setup as part of applying to the Barbican estate office for approval to proceed with production and installation. The other images show the table fabricated in toughened glass set as a radiator shelf.

The Barbican is a residential and cultural complex. An architectural phenomenon designed in the ‘Brutalist’ style of post war architecture completed originally in the early seventies by the City of London’s Council as ‘Council Houses’, together with public theatres, cinemas, concert halls, galleries and other cultural facilities.

After the Thatcher/Tory governments initiative to allow nominal rent paying council residence to by their homes from the council they are all now in private ownership. Inevitably most were sold on, establishing the Barbican as a high value residential complex for the wealthy.

During the 90’s & 00’s Mark carried out many refurbishments to apartments in the Barbican. The interior works required a sensitive attention to the intriguing interior facilities and structure.

The inside walls were thin and made of a composite volcanic type material. The floors carried within their depth the world’s first ever water based underfloor heating system. The kitchens are uniquely fabricated in stainless steel to exacting and unusually narrow dimensions with integral electric hobs set the length of the work service so as not to intrude into the room. Ventilation and waste disposal are also integral to the fabric of the building and so too the other usual services.

The cloakroom basins were made to a unique design and produced specifically for the Barbican. They are known as the “Barbican Hand Basin” half set into the wall with its tap set into the crescent of ceramic within its depth. Not quite boat design, but very close.

This particular client (for the table) was a banker working within the City of London’s financial sector. His New York Office in the Twin Towers was destroyed by the terrorist attack of 2001 (my client having been talking to his colleagues in New York at the time).

I (Mark) was in the Barbican that day as the news came in.

The project was abandoned by the client who flew home the next week, his business having collapsed.